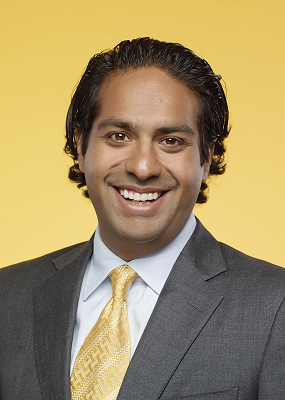 Moez Kassam is a hedge fund manager, venture capitalist and entrepreneur. As co-founder and Chief Investment Officer of Anson Funds, he presides over $1.5 billion in assets with exceptional results, regularly earning him a spot among the globe’s top performers by both Bloomberg and Barron’s magazines. Based on annualized returns from 2018 to 2020, Anson ranked among the Top 10 Hedge Funds by Barclay Managed Funds.

He and his wife founded the Moez & Marissa Kassam Foundation, which supports important organizations including Doctors Without Borders, the Toronto Foundation for Student Success and Camp Oochigeas, a summer camp creating memorable experiences for children dealing with cancer. The mission of the foundation is to improve the health and vibrancy of vulnerable communities.

When the Moez & Marissa Kassam Foundation donated to the Michael Garron Hospital, the money was used to create a modern food court, improving the eating options for frontline healthcare workers, medical staff and underserved patients. The hospital named it the Moez and Marissa Kassam Food Court.

Moez has a profound passion for the culinary arts. In his free time, he volunteers as a sitting judge for Canada’s 100 Best Restaurants and plans the future of dining as a co-creator of Assembly Chef’s Hall, one of Toronto’s best-known food halls. Moez is also the Chief Food Officer for the famous Toronto dining club Dîner en Blanc.

An active member of the Young Presidents Organization’s Maple Leaf Chapter, Moez was honored in 2018 to be placed among Canada’s Top 40 Under 40.

Moez holds an MBA from London Business School and a BA from Western University. He resides in Toronto, Canada.